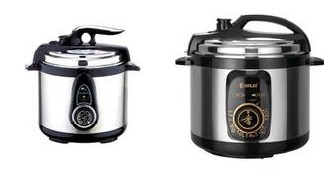 However, the development of the industry, technological progress, and improvement of standards are endless. How to create the core competitiveness of the Chinese electric pressure cooker industry is worthy of careful consideration by the enterprises, industries, and related departments. And this kind of progress is also based on the continuous satisfaction of consumer demand, constant reflection on the insufficiency of technology, and ongoing discussions on the implementation of standards.

Recently, the issue of â€œa potentially fatal defect in the pressure safety protection structure of electric pressure cookers on the marketâ€ has caused widespread concern in the industry, and the key to this controversy lies in the provisions of Article 22.107 of the standard GB4706.19-2008. Electric pressure cookers should have an understanding of misalignment and errors in execution of 'pressure relief devices that are not self-resetting or temperature-sensitive.' The meaning of â€œnon-self-resetâ€ mentioned here refers to a method of restoring the original state by manually resetting or replacing parts; â€œpressure release deviceâ€ is a control device that restricts pressure in the case of abnormal pressure. . â€œNon-self-resetting pressure release deviceâ€ is a kind of protection device that ensures the safety of users and products when the pressure cooker is abnormally pressure. The controversy about it mainly exists in the current market of electric pressure cooker products. There are many under non-normal working conditions, the pressure limiting control device can not play the role of pressure relief, or pressure relief, the pot body pressure will still appear repeatedly lifting This poses a challenge to consumer safety.

After evaluation of the third-party evaluation agency China Household Electrical Appliances Research Institute, the company evaluated some of the brands of pressure cooker products on the market and samples from OEM companies. It was found that some electric pressure cookers do have the potential for non-self-resetting pressure relief devices. To this end, the China Household Electrical Appliances Research Institute held a seminar on the technical improvement of the non-self-resetting pressure release device for electric pressure cookers. It invited many companies, standards, and technology colleagues to discuss the views on this issue and how effective it is. Technical improvement measures.

During the meeting, some representatives of enterprises proposed that at present, many companies that have already owned the necessary technical reserves for â€œnon-self-resetting pressure release devicesâ€ have caused small companies to see large companies and large companies based on factors such as cost and market inertia. If you want to do it, you are afraid to sing a â€œone-corner showâ€. Small businesses fear that the technology will not follow the embarrassing situation. At the same time, companies also need to improve the time and cost. At the same time, advances in technology require not only the companyâ€™s own efforts but also the joint efforts of the government, regulatory agencies, certification bodies, testing agencies, and standards-guiding agencies.

Some experts also pointed out that if everyone is aware of the urgency of this issue, promote technological upgrading, and achieve industry-wide follow-up, then the current cost of upgrading the company can be leveled. For those companies that have taken the lead in improving technology and solving this problem, they may have seized the opportunity to create opportunities for corporate brands, products, market share, and status in the minds of consumers.

During the meeting, enterprises and industry representatives expressed their opinions. Advanced technology companies did not share, and eventually the participants formed prudent opinions and suggestions on this issue, namely, the third party organizations outside the industry and enterprises as the promoters, and the public opinion as the lead. Through the market reaction, the clear analysis and cooperation of standards, the supervision of regulatory agencies and the follow-up of corporate technology, formed a joint force to jointly promote the progress of safety technology in the electric pressure cooker industry.

As an electric pressure cooker industry with completely independent intellectual property rights, not only does it need to make influence in the country, but it should also extend this influence to the international market. The development of such influence cannot be achieved overnight. It can be achieved by relying on one or two big companies. of. Only large enterprises are the leaders and SMEs form a joint force to achieve the competitiveness of the entire industry. This is also the voice of all participants.

Product categories of E-Scooter Battery, we are specialized in manufacturers from China, E-Scooter Battery Supplier suppliers/factory, wholesale high-quality products of  manufacturing, we have the perfect after-sales service and technical support. Look forward to your cooperation!